A Tribute to Sienna 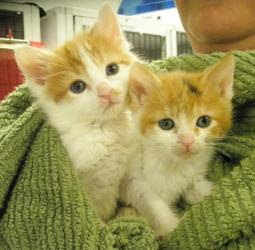 Remember these wee little ones?


Each cat at the King Street Cats rescue organization is special, but there are some who affect us to the core and forever change our lives.  A momma named Sienna and her two babies, Spring and Summer, are such life changers.
To this day, I am unable to think about them
without shedding a few bittersweet tears.

The story behind a successful adoption helps show the effort and the love volunteers place into rescued pets.
Here is one such story:
Sienna and her babies were transfers from a kill shelter who wiggled their way into our hearts instantly.
As I drove from the shelter to KSC, the three day old babies looked like little white and gold cigars snuggled up to their sweetly purring mother.  She was loving, caring and completely trusting.  A tri-colored calico with medium length bunny rabbit soft fur, she couldn't get enough attention, even when she started to show signs of how sick she really was.

At first, it was an URI, very common for a shelter cat and completely treatable.  A month or so went by and she didn't get better.  Then we received the news, distemper.  Sienna passed over the rainbow bridge not too long after she was admitted to the vet's office.  We scrambled to disinfect EVERYTHING in the shelter from ceiling to floor, then we paused to look at the babies who were only a month old and huddled together for comfort and warmth.  The stone of dread sat on our hearts.  Without a mother and with her being so sick as she nursed them, the chances were high they were not going to be long for this world.  Vivien mustered the strength to gather a task force to bottle feed, clean, and snuggle the babies so we were there every day, minimum three times a day for a month being surrogate mothers for Spring and Summer.  There was such fierce determination that these babies were going to not only live, but thrive.
The focus on getting those babies healthy intensified as they showed signs of flourishing.
Spring grew to look just like her beautiful mother.

When they started eating solid foods and running around in their tiny cage, it was time for them to be moved to a foster home.  Lisa, a wonderful volunteer, became their "failed" foster mother.  They wiggled, wobbled,
and ran their way into her heart so much so that she couldn't see them with anyone else.

I believe in my heart of hearts, Sienna lasted as long as she could to give her babies enough strength and love to help them grow and then passed them off to us
being her completely trusting self.
We must have done something right because June 10, 2012 was their 1st birthday.
Spring and Summer's (now Izzie and Turnbuckle) "failed" foster mom, Lisa, wrote this: 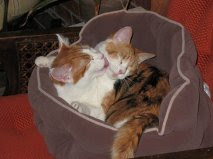 "Spring (Izzie, short for Isabella) and Summer (Turnbuckle) - are doing great! Their one year birthday is June 10th!
And we're still trying to decide how to celebrate!
They have been foster brother and sister to ten foster kittens - two from St. Croix. Five have been adopted so far!  Turnbuckle loves every kitten who arrives and is doting and makes sure that the kittens are warm and safe. Izzie would prefer to play with her foster brothers and sisters but is not opposed to providing a good bath. Izzie loves to clean everyone - kittens and people -and she shows her affection by washing your face. But they are inseparable and love to show each other tons of affection!

Even though their mother was affected with Distemper when they were in the womb, they are two of the most lovable kitties ever! Turnbuckle was affected more and has balance issues but he goes with it and loves to flop on the ground and squirm to show his excitement. Izzie was less affected, but has a minor balance issue. We are still working on acclimating to my two older cats - but time will tell." 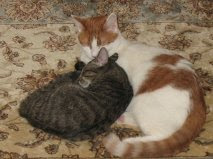 Sequoia, the striped tabby who is in the pic with Turnbuckle, was adopted in June with another KSC kitty, Dexter.
One of his sisters, Willow, was adopted in May.  His other sister, Cherry, is waiting for her forever home!

Posted by RandomlySpeaking at 11:29 AM