Life is Good When You Are A Kitty 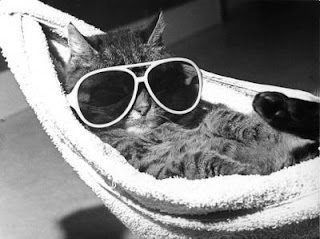 You know that thing where you do your laundry and then you get it out of the dryer and tell yourself, "Oh, I'll fold it and put it away later," but then a cat jumps in the basket, shedding fur all over it, and you're kinda upset but mostly you're like, "Awww, that's so cute?"
Secretly aren't you just a touch envious?

"Whut? This is mine now." Photo by girl_named_fred
Do you think the cat knows you're kind of jealous of the way she can curl up in a cozy basket of warm, lemon-scented linens? Yeah, of course she knows. That's why she does it.
Here are some photos of other things she does just to watch you turn green:

Cats can kiss their own butts. No wonder they are so self important. Photo by itchys
Show off.

2. Make sleep not only a priority, but her job

You can only see them sometimes, in photos, but trust me, all cats have this secret power. Photo by Cramit
There's a reason people don't mess with cats.

Sleep on expensive electronics … and stare at your own face too. Indulgent narcissism at its best. Photo byDan Correia
When someone hands me a laptop, they expect me to get to work. For a cat, sleeping is a job and a laptop is just a really solid electric blanket.

Jelly bean toes! If I did this, people would be like, "Liz, don't be so desperate." Photo by Alison Elizabeth x
My cuteness is conditional, and those conditions are not often met. When I've had a full night of darting in out of bedroom doors, I look like hell the next day. When a cat does it, she still wakes up looking squee-worthy.

6. Be famous on the Internet for doing nothing

7. Sit in a cardboard box

My parents would be all, "We sent you to an expensive private college for nothing!" and I'd be like, "Look, it's not what it seems." Photo by shashinjutsu
When I sit in a cardboard box, my parents wonder what they did wrong.

8. Almost always land on her feet

I will bet you $100 that cat stuck that jump like an Olympic gymnast. Photo by rocketjim54
I'm lucky if I land on my feet. I usually land on my face.

One time I tried out for the basketball team. What I mean by that is one time I provided the basketball coach with some comedic entertainment. Photo by KingArthur10
Because how cool is that?

Cat, is your name Kim Deal? Photo by :Salihan
How do your cats make you jealous? Come on, you can admit it!

7 Things You Can't Do with Kitty 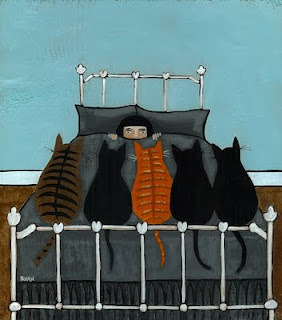 I wouldn’t trade having cats for anything in the world, but because I have them,
there are some things that I'll never be able to do again.

People tell me stories about lazing around in bed until noon, hitting the snooze repeatedly throughout the morning, or just lying around in bed and relaxing before popping up for the day. I marvel at this idea. Imagine that!

Yes, that is a cat on my head. This is normal.
My day starts with Moo’s cold, sometimes wet nose in my face, gently prodding my forehead. Then it’s a paw at my nose. Then it’s a furry body prancing across my pillow and back and forth over my body ... on his way back to nudge my face with his nose again.
Rolling over only makes the matter more urgent. Now it’s Moo firmly meatloafed on my chest, his face one inch from mine, burrowing in my neck and rubbing my chin. Eventually, it’s a mad meower, standing next to me on the floor by the bed, more persistent and unsnoozable than any alarm clock. Ignore that and he starts knocking every object off the nightstand, one by one.
The cat has not eaten for at least six hours, and is clearly starving. I’m up, I’m up! And then he eats five bites and walks away from his bowl.

2. Shower without being stared at

It’s like it’s a constant peep show at my house. Pimp’s favorite spot to sit is on the bathroom counter, and his favorite time to sit there is shower time. Maybe it’s because it’s like a steam room or sauna in there and he’s clearing his little pores. Whatever the reason, turn on the bathtub faucet and he comes running to perch on the sink.

Is it shower time yet?
Usually he just lies down and takes a break from his busy day (busy day of taking other breaks, I guess), but sometimes he walks over to where the glass shower doors meet the counter and just sits tall, staring in. At which point, I say hello and wipe off the fog and condensation on the doors so he can see me better.
I think maybe he’s worried about me in all that water.

I may or may not have an online shopping problem. Boxes arrive all the time from every which website –- Amazon, shoe clubs, pet companies, you name it. Most people keep what’s inside the boxes and throw out the packaging. I empty the box and place it smack-dab in the middle of my living room floor and announce, “Moo, I got you a box!”

No box is too small or too big for Moo.
Every box must be inspected immediately. You can count on that. And if it’s a favorite, the box stays there for weeks (sometimes more), until a new favorite comes along. I try to keep it to one box, but sometimes you just can’t help it if he falls in love with several.
Boxes are practically part of the décor in my house.

4. Have “a moment” with my boyfriend alone

Moo can't see affection happening without wanting to be part of it and getting his fair share. He’s an attention whore, and doesn't like anyone hogging up what should rightfully be his.

Look into my eyes... You will give me all the attentions...
So every time my boyfriend even so much as pulls me in for a hug, Moo comes right on over and starts rubbing up against our legs and doing figure eights. If we’re lying on the couch and the BF leans in for a kiss, there’s Moo walking across us, tail furring up our faces and demanding we direct our attention to him.
And God forbid there’s something more intimate going on ... he’s on the bed just having to be a part of it. (For the record, I push him off. Being in the room is one thing, actually being on the bed is another story. But that doesn’t mean, of course, that he doesn’t just jump right back up. Talk about distracting!)

I can no longer light candles in my house. Even the ones that are in jars and covered, there’s no way, for two reasons: First, the obvious –- I don’t want any accidents happening and tails or fur catching on fire.
Second, because I have a habit of forgetting to blow candles out, and then I have to turn around halfway to wherever I was going to go back home and deal with them. Even if it is a jar candle that would never light up the house, I don’t want any chance of accident with the cats there.

No candles around me, no sirree.
But I love candles, especially the smell of them, and those plug-in air fresheners just aren’t the same. Luckily, I’ve discovered wax tarts. These are amazing! You melt them in little tart warmers, which are heated with tiny tea lights. I put them high up enough where no cat can get to them, and I never have to worry about forgetting to blow them out, because when the tea light is done in a couple hours, it just goes out on its own. Best. Invention. Ever.

6. Lie on the couch with a blanket without a cat on me

This scenario plays out every time: I lie on the couch to watch TV or read a book and pull a throw blanket over me to keep warm and cozy.
Cue the cat!

Pimp on the blanket, like so.
Pimp somehow hears it (do blankets make noise?!) and runs right over (no exaggeration, he hauls kitty butt) to get on top of me. He then proceeds to circle until he find the perfect spot (always the same spot; I don’t know why he makes a show out of it) and settles down.
And it’s not just me, either. Anyone who lies on the couch with a blanket gets the same treatment.
And it’s not one particular blanket. Anyone with any blanket on the couch gets a Pimp topper.

7. Keep things on my nightstand

I used to plug in my cellphone and leave it on my nightstand by the bed. I also used to keep a ChapStick there (hi, my name is Dorian and I’m addicted to ChapStick) and the TV remote and a few other random things.
One day Moo learned that nothing made me sit straight up awake faster than the sound of my $600 iPhone crashing to the floor. And now it’s like a game. I don’t think he does it just to wake me up anymore; I think he actually enjoys watching me react.

I dare you to put something on the nightstand.
One by one, he’ll knock something down and just look over at me until I acknowledge it. He’ll lightly tap his paw at the TV remote until it falls, and then he’ll glance my way to make sure I saw it. Yup, I did. Okay, next thing! And off goes the each item on the nightstand until everything is on the ground. Then he walks away nonchalantly. His work there is done.
So now I keep only nonbreakable items that make minimal noise when they fall. This way he still gets to play his game (I can’t believe I entertain this, but whatever) and I get to sleep through the night without worrying if my phone will turn on or not the next morning.
See the full article here.

Posted by King Street Cats at 8:57 AM 0 comments