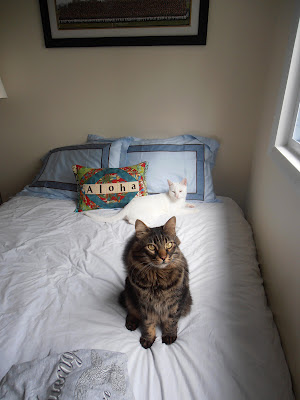 Love hearing about our kitties in their new homes,
so here's an update on Pamuk & Sultan.


"Hi!  We just wanted to drop you a note from Sultan and Pamuk, who we adopted from KSC earlier this year.  They have settled into their new home over the last couple of months and are doing great.  They are very cuddly and Pamuk is as athletic as ever.  They love to sit in the windows and watch squirrels and birds, and nap together very adorably.  Sultan loves the Furminator and they both enjoy climbing on their new jungle gym.  We're attaching a photo of the guys, who are very grateful for your hospitality while they waited to come live with us!"


Have you been rescued by a kitty from King Street Cats?
Please send us an update and photos!
Shoot them over to Contact@KingStreetCats.org