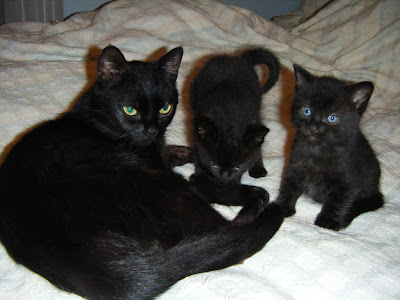 For the first couple of days after Shady and the EasterBunny came home with me, I was compulsively checking in on them several times a day and even a few times stumbling in during the night.  Nightmares would wake me up from a sound sleep.  These pests had me thinking Shady was sleeping on one of her babies and would suffocate him or that she was crying in pain from the surgery and I wasn't there to comfort her.  For the first two days, I held her food bowl up to her so she wouldn't have to move to eat.  OMG... I AM one of those crazy cat ladies!  Now the acknowledgement settles into my heart and I roll with the punches.  These three have taken up residence in my heart forever.  Whomever adopts these lovelies will have to send me updates on their progress, otherwise I will be devastated.

So the story continues: A week after they were settled back into my second bedroom, Shady up and moved the biggest and most developed kitten, Easter.  My heart dropped and those scary thoughts creeped in.. "What if she knows something is wrong with Bunny?"  "What if she decides to stop feeding Bunny and hides Easter under the bed on the cold wood floor?"  "What if..."  My consultants suggested that I keep the room warmer (80+ degrees), add in a heating blanket to the nest, and start feeding the smallest baby via bottle.  I went back to Shady's room, sat in front of the nest and just watched.  Hmmm... she came when I picked up Bunny and he chirped.  She still cares.  Tried feeding him with a bottle and he wasn't interested.  Hmmm.  The nest is a small animal carrier that I took her in to the vet to deliver the babies.  EUREKA!  It's too small now!  Off to the shelter I ran to pick up a LARGE animal carrier.  After bleaching the carrier, rinsing it, bleaching it again, rinsing it two more times and drying it, the heated blanket (that shuts off every hour), a soft towel and both kittens went into the new and improved nest.  Shady followed and was happy for another week.

The second week, she up and moved Easter AGAIN!  Sigh.  What now?  The towel needed to be changed.  She sure was picky.  At least this time, I kept my cool.  This week, I started handling the babies to get them used to being picked up, loved on and handled by humans.  Shady took me woman handling her babies with grace and dignity.  In fact, she rolled over for me to carefully rub her scarred, swollen belly.  The babies even started to explore their nest a little.  Such sweet babies.

Third week, they creeped to the edge of their nest and peered over the lip.  Uh-oh... almost time for them to spill out onto the floor and start exploring the entire room.   I'd better clean up the clothes that were left there and the shoes hanging out in the corner and the... maybe not say more about my internal mess.  :)

Week four brought about their biggest changes.  Their eyes are wide open and they tumble out of the carrier almost on purpose!  Such big blue eyes they have.


Posted by RandomlySpeaking at 9:26 AM