Meet the Board of King Street Cats! 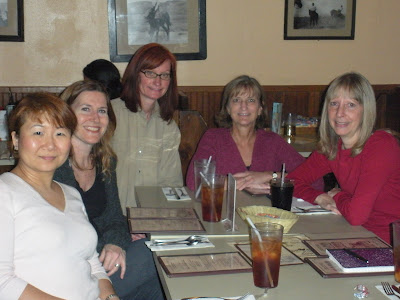 From L to R: Helen, Alyson, Dawn, MaryBeth, Vivien
We decided to do a brief interview with the Board Members of King Street Cats (KSC), just to allow you to get to know them a little better.  They are such a great group and put in a great deal of hours, many of which are behind the scenes.  Let’s see what they had to say in response to the following four questions:
1.  What brought you to KSC and when?
2.  What's your real job...the one that covers the mortgage and kitty litter expenses?
3.  How many cats rule your home (feel free to tell us about them as much as you'd like)?
4.  What's your funniest KSC memory?

Helen:
1.   I learned of KSC from Christina Montana, who is a pet communicator. After one of my kitties passed away in 2006, I came to KSC to adopt a companion cat for Pookie...and the rest is history!
2.   I am in commercial real estate.
3.   I have 6 of my own and currently 3 fosters running around my house - and they are ALL KSC cats!
4.   One time a potential adopter was filling out the application and when he got to Spay/Neuter part of the application he put down "yes I am neutered!".


Alyson:
1.  I started working with Vivien because we were, and still do, use KSC as a resource to help WHS with some of our shelter cats. WHS reaches out to local cat rescues in the area to help re-home our shelter cats, as we try to find them homes as well. There is a new person now who is in charge of cat rescue, but at the time, I just knew of KSC because I live in Alexandria and had heard of the great work they do. I was asked to join the board the following year, so I guess I got to know Vivien and KSC early in 2010.
2.  I work for Washington Humane Society (WHS) and I am a program manager in charge of CatNiPP, the feral cat program, plus the cat foster care program.
3.  My husband and I have 4 cats and a dog. Our cats are all rescues; 2 were trapped as feral kittens (that I socialized), one was a foster from a rescue group out in near Louray, VA, and the other was a failed WHS foster. Our dog is a failed foster too.
4.  Not sure of a funniest KSC moment, but I enjoyed my visits to the cattery. I used to transport cats and kittens back from the WHS spay & neuter clinic, after surgery. I always love pulling up in the evening and seeing all of the cat faces peering out the front door of KSC. Plus I enjoy watching them all go crazy as the caregivers/volunteers get wet food ready for them.


Dawn:
1.  I came to KSC back in 2009 when the news broke of Michael Vick’s dog fighting scandal.  I could either express my anger by protesting football games, or direct that energy in a positive manner by volunteering at King Street Cats
2.   I am in government relations.
3.   I have my one very special kitty, Jasmine.  She’s a tortie (enough said).  I adopted her because she was an older kitty and I wanted her to have a loving home in which to live out the remainder of her life…which seems to be longer than anyone expected.   I also foster kittens for KSC regularly.
4.   At one point in time, I was fostering Broccoli, Potato, and Bobby.  I let them out of the guest bedroom (their residence) and they all made a bee-line to the bathroom where I keep Jasmine’s litter box (they had 2 litter boxes in their bedroom, mind you).  Broccoli jumped in and Potato decided she needed to use the box right then as well, crawled under Broccoli, and suffered the consequences of being in that location.  Bobby was smart enough not to jump in the box as well, but he was seen doing the “potty party” dance outside the box until it was clear (and safe) for him to go in.


MaryBeth:
1.  I came to KSC in 1997 - a friend of mine was working at Unique when the Albert Foundation (KSC predecessor) was just opening its orphanage at 213 King Street.
2.   I am a SVP for meetings and events at the Urban Land Institute.
3.   2, two year olds.... From KSC of course. Booker and Fraser.
4.   Creating cat "art" with the kittens.


Vivien:
1.  I came to KSC 13 years ago.  I was a small, local business owner, and Ethel, another small, local business owner came to visit me.  Apparently she pegged me as a cat person and told me about King Street Cats, being housed in her business.  I started as a feeder/cleaner 1-2 nights a week (in a room containing 60-70 cats…you can imagine how big of a job that is!).
2.  I am the store manager for Decorium, located in Old Town Alexandria.  I also do pet sitting on the side.
3.  That varies, depending on the number of fosters I am housing, but all my kitties are from KSC.  Gracie has held a very special place in my heart.  I met her when I first started volunteering and she was a feral kitty.  I made her my “project” for the next year, seeking her out every time I went to KSC.  She eventually came to trust me and I adopted her.  She still doesn’t like being picked up, but she’ll “allow me” to lend her my lap, on her schedule, of course.
4.  Several years ago Melissa (another KSC volunteer) and I used to sit outside on the sidewalk and "beg" for money for KSC at 213 King Street (where the cat room used to be).  We had a cat called OREO in the room who was a very thin, sick tuxedo female cat with HUGE eyes. She LOVED people so we used to take her outside in a cage and with her putting out her shaved paw to anyone that passed by and looking at them with her huge eyes, and she was our champion fundraiser (Yes, we did anything to get money.). Oreo lived another year defying all the odds!!  The next year we took her ashes to Best Friends Animal Sanctuary, located in Angel Canyon, UT, so she could be buried in their pet cemetery. Well the next year we visited her grave site AND there was money on her headstone!!!! Where did it come from???  Last year it was the same thing - more money on her grave and this is the only grave with money on it out of the hundreds in that cemetery. Is she still fundraising for us???????
Posted by King Street Cats at 5:48 PM

Nice to put faces and names together. Great post idea!

Thanks, ladies. You are doing a terrific job under very difficult circumstances at times!

They must have been hiding their super hero(ine) capes for this picture. Thanks for all your hard work, ladies!

You ladies ROCK!! Your patience abounds and your coolness factor is rising for all you do! :)